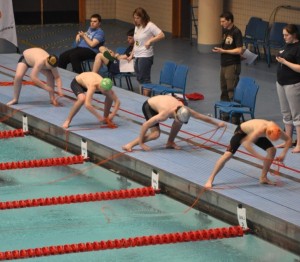 Retford competitors in the 12.5m Line Throw event at the Speed Championships

Report from Speeds 2016 by Pete Moyes:

Well done to the Retford team who competed in the National Speed Championships at the National Aquatic Centre in London. This is the first time we have had a team at the event and a great experience for everyone. Some hard lesson learned by all, including myself having been DQ’d from two events missing a gold and silver medal in my age group for schoolboy errors! Must try harder and get in the water more often to do it.

Great performances- Hannah Calverley and Theresa Tomlinson a 6th in the open Line Throw- well done, a top performance among the best in the UK. Alex Moyes and Hannah Calverley also showed us all what you need to complete the open category 200m Super Lifesaver event — 32nd and 22nd respectively. Well done.

Jess Newton competing in her first major championships recorded her new PBs showing a big improvement in her time for the Manikin Carry with Fins. Georgina also showed improvements with new PBs for her events with fins.

For a small club with some first time entrants we have a great collection of medalists, our rising stars Jacob Screeton and Ben Tomlinson had a great 10m, 12-14 yr old, line throw with 11.97s taking silver, both went on to improve on their PB’s in each of the events they took part in. Well done to you both.

Our masters also showed what they are made of. New on the scene is Theresa Tomlinson 40-49 yrs category, with a 5th in the Manikin Carry, 3rd and bronze medal in the 200 Obs, and a fantastic swim in the 100m Manikin Tow with Fins gaining her first Gold!! This makes her the 40-49yrs Masters UK Champion in the 100m Manikin Tow with Fins. Well done and a great boost for the training up to the Worlds in September. Hazel Moyes and Peter Moyes managed a silver in the 50+ Line Throw and Peter Moyes bronze in the 50m Manikin Carry. At least I managed to not get DQ’d in those two, although the Line Throw was close, only just reached Hazel’s fingernails — phew!

Please also congratulate Amy Evans who is a club member and an inspiration for our young aspiring competitors. Amy was swimming with the Rascals team — well done Amy.

Stay up-to-date with Retford Lifesavers at the Speed Champs using the hashtags #RADLSpeeds and #Speeds2016. Link to this page: bit.ly/1n6aDRT.